I mentioned in my last post that Sean FitzPatrick was found not guilty in his first criminal trial.

I wonder if this means that he is innocent of any wrongdoing?

Let's examine some of the evidence.

Fitzpatrick was the CEO of the bank from 1986 until 2005, when he became its chairman. He was chairman until he resigned in December 2008 as details emerged of secret loans (more than €100 million!) he had taken out with the bank.

So he presided over this bank during a period of unprecedented growth. The following chart shows the growth in share price over some of this period: 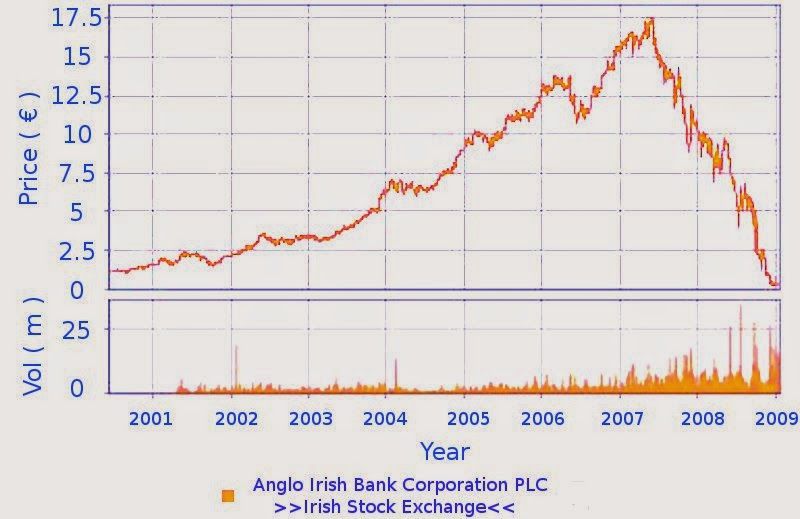 It is clear in hindsight (and was pretty clear at the time if I'm being honest) that much of this growth was due to imprudent lending practices.

Professor Patrick Honohan (an economist who was appointed Governor of the Central Bank of Ireland in September 2009) had the following to say in 2009:


"A very simple warning sign used by most regulators to identify a bank exposed to increased risk is rapid balance sheet growth. An annual real growth rate of 20% is often taken as the trigger. Each of the locally-controlled banks had at least one year in which this threshold was triggered. One of them, Anglo Irish Bank, crossed it in eight of nine years, and indeed its average annual rate of growth 1998-2007 was 36 per cent. Another, Irish Nationwide, crossed the line six out of the nine years, for an average rate of growth over the nine years of just above 20%. So this was a very obvious and public danger sign not only for these two banks, but because of the potentially destabilising effect of reckless competition on the entire sector. The rapid growth in the market share of Anglo Irish (from 3 to 18% of the total assets of the six locally-controlled institutions that subsequently received the Government guarantee) was certainly an important influence inducing the other banks to relax lending terms to avoid losing even more market share."

Professor Honohan's last sentence here is very mildly phrased: I prefer to think of Anglo as a cancer which which was affecting the Irish banking sector and the wider economy.

He was the chairman of the bank at the time (2008) when the following took place:
So did he know about these things? It is interesting to note that Judge Nolan noted during the case that FitzPatrick was “the chairman of the board and not in the office every day”

It has been my experience that companies have an ethos and a culture, and that these come from the leadership. We have learned quite a bit about the culture of Anglo, especially from the infamous tapes.

If FitzPatrick did not know about any of these illegal activities, then he created the environment in which they could take place. He set the tone and the agenda. He hired the people.

It seems incredible to me that when (if?!) FitzPatrick examines his own conscience, he is unable to find anything which causes him remorse and disquiet for his future.
Posted by Peter McCullagh at 14:22
Email ThisBlogThis!Share to TwitterShare to FacebookShare to Pinterest
Labels: Banks, Irish Economy
Newer Post Older Post Home