A few months ago I went looking for some kind of environment to give my eldest daughter some exposure to programming. As she has a iPad I was really looking for something that would work there. I quickly found (to my surprise) that Apple do not want people writing code on iPads!

What we ended up using was Cargo-Bot. This is a free game which teaches some of the basics of solving programming puzzles. The idea is to control a robotic arm which can lift, move, and put down boxes. You are given a starting position and a desired ending position and have to work out an algorithm and then write the "code" by dragging-and-dropping icons for instructions. But to be honest it is more of a puzzle and less of an aid to learning programming. Perhaps we should have downloaded Codea which is the language which Cargo-Bot was written in. But that called for a $10 investment and we just couldn't make up our minds.

In the end, of course, CoderDojo came our way and we discovered that Windows and Scratch was (for us at least) the way to go. My next posting will be on Scratch.

BTW: It seems that Apple are relaxing these rules about not allowing people to write code on the iPad. Perhaps Codea itself is a good example of this.

Here is a picture of a user trying to solve a puzzle in Cargo-Bot: 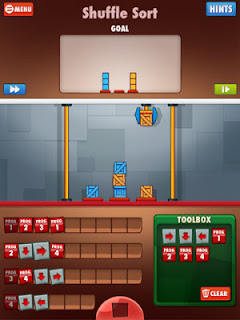