In August 1976 Popular Electronics published an article showing how to build and program a very simple single-board “computer” called the “Cosmac ELF”. The designer was Joseph Weisbecker. The article can be seen here and a very nice picture of the device can be seen here.

I put the word computer in quotes above as nobody today would recognise this device with switches for input and LEDs for output as a computer!
But I thought the device was simple and elegant, and I was extremely impressed by the small component count.

Weisbecker published three subsequent articles in the magazine extending the capabilities of the device (all available at the link displayed above). The fourth (in July 1977) added a small amount of circuitry which enabled the computer to display simple graphics on a TV. The example of the cover of the magazine showed a simple image of the Starship Enterprise (which was, of course, the perfect selection for me and people like me).

I never build/owned/used one of these devices. My first computer was an Apple ][ which was light-years more advanced having a full keyboard, using a TV as an output device, and having the ability to save/load programs on cassettes.

But I never forgot the elegant Cosmac ELF.

I was impressed again when I discovered that a gentleman by the name of Maciej Szyc published (back in September 2006) an emulator for this device and that this emulator (a) looks great and (b) was developed entirely in JavaScript! So you can try it out without having to download anything to your machine!

There are lots of other people who have put time and effort into paying tribute to the Cosmac ELF. If you want to know more then an excellent place to start is here. 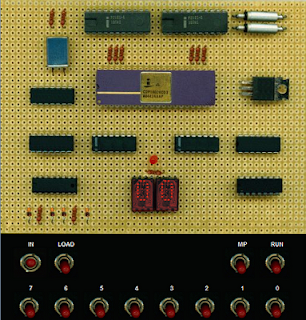